We have a 1.5 acre organic vineyard, plus polytunnels. We grow a wide range of crops for our vegetable box scheme. We also sell wholesale. One of our first customers was the wholefood shop in Rugby, who still take our produce today. Today we concentrate on the vineyard though the veg box scheme continues on a smaller scale with 30 boxes.

We have had to find the best ways of doing things through trial and error. Our approach is to choose the most appropriate disease-resistant varieties (we settled on Regent and Rondo), avoid sappy growth which is susceptible to disease and provide the best structure to allow more air and sunlight to the plants. We are still learning and adapting our systems as we go along.

We have used a lot of woven-plastic weed suppressant in the vine rows to try to keep the weeds under control. It needs a lot of work to keep weeds from running over the top and when couch gets near it is quite impossible as the very sharp growing points go through as though it were not there. The alleys have grass and sundry wildflowers and they are mown occasionally to keep competition down and to return the nutrients to the soil. Once established, vines are quite drought- resistant with deep roots to collect water if there is limited rainfall.  We now prefer to use composted council green waste to provide potash. Vines are not particularly hungry. We tried clover and trefoil in some alleys but this overdid the nitrogen so now we are just allowing self-seeded wild white clover and trefoil to grow randomly, which seems to be enough.

We have no significant insect  damage but fungi are active. In the past we have used sulphur and copper sprays, but now we use Garshield™ a concentrated food grade extract of garlic supplemented with natural plant derived additives. The manufacturers claim that it promotes vigour and stimulates the plant's natural processes to produce balanced healthy growth and encourages resistance to mildew and botrytis. We spray roughly every three weeks from flowering to harvest and find it very effective.

The worst pests here are badgers. They are very partial to grapes and consume huge quantities in the course of a night. We now use an electric fence, which seems to be effective. Birds from blackbirds to pheasants also fancy grapes for lunch. Short of 1.2 acres of netting there seems to be nothing one can do against birds. The problem with nets is that hedgehogs get caught, so we have to use wire netting at ground level.

“Organic growing is a way of life – it is life and life is good! We need to eat decent food. Our advice is never work hard, always work quick and easy.”

In the early 70’s we had a serious attack of middle-aged madness, which manifested itself in the desire to have a small vineyard. We planted 1.5 acres of Mueller-Thurgau - a variety recommended at the time. Thinking that the vines would take a long time to become profitable, we started growing and selling organic vegetables. Soon some pigs were added into the mix.

Every year we attended the Soil Association conferences at Cirencester and learnt many tips on organic growing. After a talk by Jan Deane about box schemes we decided to start one ourselves. It developed well and reached a peak of 280 boxes a week, all delivered by our van and two-beast trailer. We grew over 30% of the vegetables ourselves.

In the mid 1990’s the Mercian Vineyards Association was formed; we are still the only organic members. Learning from other experienced members led to an attack of ‘old-aged idiocy’ and we grubbed all of our 30 year old Mueller-Thurgau and started again. It’s the best thing we’ve ever done! We now have four varieties of vines and have received awards for our wine.

We have employed a number of local unskilled workers over the years, and hosted numerous WWOOFers from almost every continent. We don’t need foreign holidays  - the world comes to us! The late Richard Jacobs started out with us as a lad, fresh from East London, and later climbed up the organic tree to a high level at Organic Farmers & Growers.

Established in 1973 we were the first English vineyard to get Soil Association organic certification and are committed to ensuring our system is as sustainable and environmentally friendly as possible.  Chevelswarde were named ‘Organic Food Heroes’ by the Soil Association and were awarded a top accolade by the Organic Growers Alliance, being described as ‘legendary’ in the organic farmers movement – a great honour.

We are not old, we’ve just had too many birthdays (Ruth is 90 and John 87)!  John takes no regular medication while Ruth has diabetes (in the family), but is in good health otherwise. We put it down to eating sensibly - home-cooked, mostly organic food and not highly processed food. Our customers are our social contacts and organic growing is our life.

Use the comments function below to join in the conversation. Please keep your comments relevant to this profile, you can contact the farmer directly for any other questions.

The information contained within this profile reflects the views and practices of the profiled farmer and does not necessarily reflect that of Agricology and its partners.

Trees and crops: making the most of the space

Novel vegetables: Observations on growing a range of tropical crops

blog We need to understand the drivers and constraints on growing crops in rotation, especially predicting the future impacts of climate change on crop rotations. What...
Rotations, Weeds, Pests & diseases 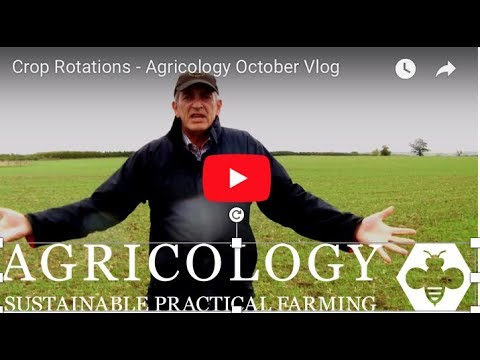 blog June was a really busy (and hot!) month for the Agricology team packed full of some great events, one of which was the no-till conference...
Weeds, Pests & diseases, Pollinators & ecological services, Biodiversity